Look What I Got: Future Regret? 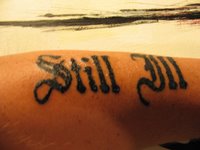 I doubt it. But I must not come to think of my un-tattooed skin as negative space—nature abhors a vacuum, &c.
Posted by Guy Clinch at 9:45 PM 1 comment:

Look What I Got: Pashernate Love 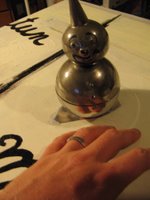 Boy howdy! (please focus on the shiny ring on my fing-fing) I will come to define "uxorious". And that's the word.

The lucky girl is here. But it's me who's lucky as a goddam mug.
Posted by Guy Clinch at 9:40 PM 1 comment: 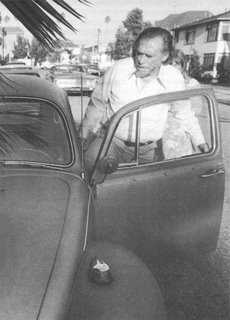 Seeing a film based on Charles Bukowski scares me just a little because I cannot begin to count the number of nights into days and days into nights I spent in boozy dissipation while feverishly reading his (excellent) books back in the early 90s. Call it a failure of imagination on my part, but I was a Bukowski manqué.
Posted by Guy Clinch at 9:19 PM 1 comment:

I had a ridiculous bicycle. It was BMX-type, with a suspension system that is popular now on larger bikes--large shock absorbers rather than forks in the front--but the technology, such as it was, had not yet been perfected. For instance, if a sharp turn was attempted, you were likely to get your foot caught on the large springy shocks, resulting in a nasty spill.
Nevertheless, my bike--painted in a harsh primer gray that exhibited a reckless attitude to the opinions of others more concerned with appearances--was a source of screw-you pride. I loved riding around the neighborhood, carefully negotiationg sharp turns, of course, but feeling special for the uniqueness of my conveyance.
But my neighborhood was full of teens and tweens, full of children whose hormones and nurturing mandated they express their dominance, and I was nowhere near the top of the heap, notwithstanding my cycling pretensions. One kid, a couple of years older than me, 13 maybe, exerted a certain bullyish charisma over us all. His name escapes me, but let's call him Mark. Mark had a sweet paper route that wended up and down the boulevard. He recruited me to sub for him for a week, owing to the fact that he had broken his arm. His arm was encased in a heavy cast that had been duly signed by all the local girls in thick black marker.
He gave me his heavy canvas shoulder bag and arranged for me to pick up the papers. I was to deliver the Dayton Daily News, which was the afternoon paper (in those days, 1980, 1981, not sure which, we had a morning paper and an afternoon edition). Besides delivery, I was to make the weekly collection.
I mucked it up somehow; missed deliveries, missed collections. Mark confronted me on Daleview Avenue. He faced me, he astride his bike, I astride mine. He menaced me with harsh words and fixed stare. Suddenly, his casted arm, hard and heavy, swung at me and hit me square in the nose, not quite knocking me out, but stunning me and causing a shocking nosebleed. I let my bike fall to the ground. I stumbled across the street and cut through the neighbor's backyard and into mine, where I lay and wept, helpless and reeling, not so much from pain as from confusion--what to do? It was, I think, the worst thing that had ever happened to me in my life. At that point.
Posted by Guy Clinch at 9:58 PM No comments:

I Guess Baghdad Is Out, Too 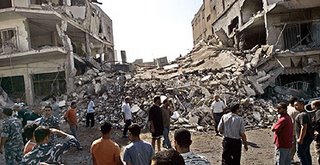 Within a month, my fiancee, Phung (link to her glorious blog at right) and I will embark for our marriage/honeymoon. We're doing what is known in the wedding industry—and lord know's it's an industry—as a "destination wedding". Italy's Amalfi Coast is our likely destination, but it occurred to me today that there are probably some smoking (literally, perhaps) hotel/vacation package deals in Beirut about now.

If we've learned anything from the recent unhappiness in Lebabnon, it's that Beirut had, through grit and determination, re-emerged as the prime tourist spot it once was before all the havoc of the late 20th century. Wasn't it known as the "jewel of the Mediterranean" or something?

Phung has nixed the idea of Beirut nuptials, and I probably would not have ultimately wanted to go just now, being American and all; it was our bombs we supplied to Israel that has blown them back to Square One, after all. Even wearing one of my Bush Is Vile shirts would do little to appease the understandable anti-Americanism that runs rampant through that unfortunate country.

That said, I hope that I will someday be able to spend my meager tourist dollars in that lovely spot.
Posted by Guy Clinch at 9:27 PM 2 comments: 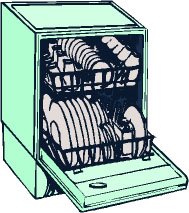 It was 1975 and I was 5, creeping out of toddler-hood, looking ahead to the grown-up lifestyle before me---that bracing first day of kindergarten and its attendant challenges: really getting a grip on colors, on numbers past 10, nappy time on our little mats, not pulling the hair of girls, seducing the teacher, playing Seven-Up (you remember that, don't you?).
On this particular day I believe I was wearing burnt orange corduroys and a red and blue t-shirt. I was home. It was late summer; I was still virgin to how bittersweet that time can be for school kids, as the long summer comes to an end, the days of kickball, catching crawdads in the creek, aimless forays into the woods. I was not yet a school kid. But soon I would be.
Our long, galley-style kitchen was in its usual 6-ish flurry of activity, with Mom finishing up dinner (after a long day of work herself) and Dad in the bedroom, doffing his work clothes, starting, of course, with that constricting tie (quite wide in those days). We had what in any era would be considered an atrociously poor choice of carpeting (yes, carpeting in the kitchen): a strange burgundy-color with brownish honeycomb pattern. In places, little tendrils of the carpet stuck out, pulled and tugged on by the cats or possibly by Muffy, our mutt, whose stalwart love of peanut butter I shall never forget.
The wall near the kitchen table was covered in wallpaper that depicted a birch forest. It wasn't a pattern---it was, essentially, a 10' x 8' photo. I never really felt outdoors when we ate there; indeed, I felt vaguely oppressed by its insistent YOU-ARE-OUTDOORS vein.
But on this evening I felt so happy, so glad to be there, right then, with those two people I loved so much, even if I didn't yet understand what familial love was. Not understanding love but experiencing it nonetheless is surely the best way to feel it; it comes through unalloyed and unfiltered by the intellectual screens we throw up as disappointed adults, as hurt exes, as betrayed lovers.
My Dad, with his pleasant scent of pipe tobacco, the scratchy 5-o'clock shadow he'd rub against my cheek affectionately, his capable, mustachioed face. My Mom, with her tenderness and soothing singsong, her wonderful way of sidling up and squeezing my shoulder.
I wanted this, I wanted to be in the middle of this warmth.
Dad had come down and started unloading the avocado-green dishwasher (was there any other color then?). At some point he was distracted and left the kitchen. The dishwasher was agape, its door open and inviting me to sit on it. Which is precisely what I did.
CRACK!
Even my slight, 5-year-old frame (I hadn't yet cultivated the paunch I bear today, at 34) was enough to break it. The dishwasher door was broken.
This led to the unpleasantness.
Now, I believe in false memory, and I have no doubt that some details of this narrative are in fact false, colored by my greater sensitivity to detail and plain old projection. But I believe that my father (he's called Father when you're in trouble) actually unloaded that old cliché, "This is going to hurt me more than it's going to hurt you."
Was this my first spanking? I don't know. It's the first I remember. And it wasn't my last. Encrimsoned cheeks would be mine many more times, at home and at school. Corporal punishment enjoyed fairly widespread acceptance in 1975, so I certainly don't resent my father for the spanking me.Still, though, it remains here within me. A bad memory, my earliest. I don't want it anymore.
Posted by Guy Clinch at 1:06 PM No comments: