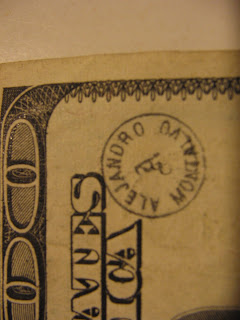 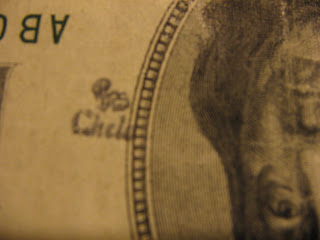 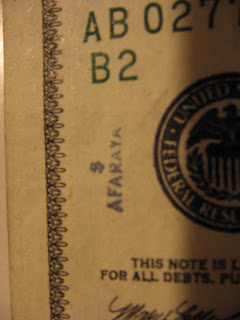 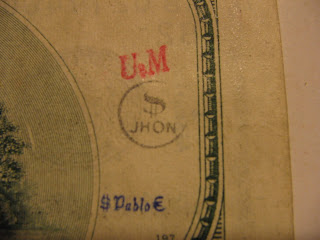 Because I fear that creditors will somehow infiltrate my bank account, I lean heavily toward a cash world, in my pocket. So I notice stuff. Like all the marks on money.
Given to rumination about objects, I cannot hold a coin, Federal Reserve Note, or vibrator without wondering where it's been.
In my paranoid check-cashing, though, I've noticed an interesting phenomenon on high-value notes. Given that most of our paper currency bears traces of cocaine (esp. here in DC), we shouldn't be surprised that much of our folding money, particularly of high denomination, has gone through the hands of pushers.
And I believe it's druggy folks that use these wonderful little rubber stamps on money. I recently came across a well stamped $100 bill, illustrated here. Who are these people? Is it ego that makes them tattoo our money? Okay, that's a stupid question.
Anyhow, viva "Jhon"!

Posted by Guy Clinch at 8:50 PM No comments: 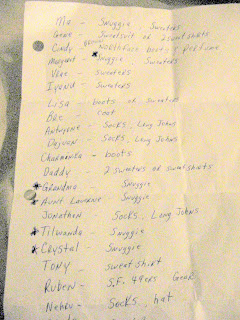 Today I found upon the linoleum floor of my local Safeway a list. I assume it's a Christmas list and, while I hate to be a spoiler, I doubt that listed recipients read this desolate "web log".

Anyhow, some people are gonna get a lot of Snuggie shit, boy howdy! Also long johns, socks, 'n' sweaters! A few black sheep are slated to get other products, among them San francisco '49ers gear and boots. "Bre" gets a coat. Cindy gets something called a "brown northface" in addition to perfume, which, though worn, is the only thing on this list that I can confidently say has no true insulating use.

"Nehru" gets a hat, in addition to socks.

Only "Gene" get a full "sweatsuit". "Charminika", you're getting boots only. I hope they're thigh high and I hope you're really hot.

The overridingly positive thing about this list is that it discloses a large family and friends. Whoever made the list still has a "Grandma" to think about (I haven't had a grandparent in decades), in addition to the odd "Antwyone" and "Tilwanda."

Hope Linda gets her sweater.
Posted by Guy Clinch at 8:29 PM No comments: